Archbishop Justin preached in Maputo’s Maxaquene Sports Hall at a Service of Thanksgiving for the Proclamation of the Province of Mozambique and Angola and the installation of the province’s first Archbishop.

May I begin by acknowledging which I should have done at the beginning and appreciating the presence of His Excellency, the former President and his wife, the Secretary for Justice, and the Secretary of State for Maputo thank you so much Your Excellencies for being with us today.

John says to us, in the beginning was the word.

God says to you and to me, come and work with me. This story of this new province comes from the stories of many faithful Anglicans, some known only to God, others in our hearts.

During the months of July and August, we had a gathering of Bishops from around the world at Canterbury and they talked about what it meant to be the Anglican Communion. And reading together the book of 1 Peter, we remembered that Peter says, 'We are shepherds who tend the flock, lookout for danger and seek the lost sheep.'

In one of the sessions., interim Archbishop Carlos gave an extraordinary story of what it means to be a shepherd in the new province of Mozambique and Angola. He talked about the Civil War and the million people who died. He spoke of terrorism and in our hearts we felt the sorrow that this part of the world has seen and has survived, but the most wonderful part was when he spoke of the light that comes from the darkness, the shared colonial history and struggle for freedom that Mozambique and Angola now should choose to express as brothers and sisters in one province.

The stories of disarmament, demobilisation and reintegration of the members of the military into their families and communities. The work being done in the north today by peace clubs of Christians and Muslims standing up to radicalization and building new community.

He spoke of the message of love and reconciliation, which heals great harm and suffering.

This is what IAMA brings to the global church. This is your treasure to share with the world the story of reconciliation, because you have shown over many years, decades, that in Jesus, the darkness does not overcome the light.

Last week, I was listening to a man from Afghanistan. He had to come as a refugee to England in 1999.

Many of you will understand.

And then he saw the new cathedral built in 1965 next to the ruins as a symbol of new life and new hope. And he began to feel hope. Today he is a British citizen and he holds a very senior position.

You are the living cathedral. Built by God. Share the treasure of your experience and go on building.

This province knows the message of 2 Corinthians. We are afflicted in every way but not crushed, perplexed, but not driven to despair, persecuted but not forsaken, struck down but not destroyed. Always carrying in the body the death of Jesus. So the life of Jesus may be made visible in our bodies. And you are like Paul confronting death by seeking ever more fervently the Life of Christ.

In Angola, you have the worst drought for forty years. And the food crisis because of the climate crisis. And you are providing emergency feeding programmes, feeding those who would starve otherwise.

In Angola you are also facing malaria, cholera, yellow fever, HIV and the hospitals running out of medicine. The Nora Sturges clinic in Lobito is run by the Anglican province in Angola. And you are tackling malaria with the help of the Flowers Foundation.

You are showing the light in the darkness.

There was a football manager in England -  and yes, I know it's the time of the World Cup –  he said you are only as good as your next game.

So what about the future?

The message you have for the world is hope of transformation. So it must be lived so that it can be seen that is what John is telling us.

In some parts of the Anglican Communion we have forgotten that. We think we make the church.

Mozambique and Angola show that it is Jesus who brings the light of life and hope to the Anglican Communion. So we must together as Christians go further. We must heal the wounds of the past and not wound again. You do not heal a wound by cutting yourself again.

I know that many faith leaders and many of you are showing young people that there are opportunities: there is hope, without violence or corruption.

Let this province be one that shows leaders how to disagree well. We all disagree; in families, in churches, in nations, and with that you can challenge the political and business leaders because we need them all over the world and in this country to use their wealth and the power as a gift from God, not their own possession.

In a great answer to prayer this morning, the COP27 climate change summit reached a sort of agreement. With that agreement, we have an example of trying to meet damaging global and national inequalities. Let IAMA be an example of how to challenge leaders with love, and that will mean we must meet each other, listen to each other and be challenged by each other.

And you know the damage that is caused by violent disagreement in families, to women and children and in the world, in the history of damaging the creation.

So the agreement this morning on climate says that the richer nations will pay something towards the poorest, to pay for the damage that has been done in the past. When the money comes from different sources from your natural resources, let the poor look up and smile with hope because of the generosity of those with power and money.

In 2 Corinthians, Paul is talking to a community that knows suffering, a community like yours. Being a Christian does not cause us to escape suffering. The devil is at work in the world, but it means we are never alone in our suffering.

May God give you strength to show his life so that the churches in Mozambique and Angola will inspire the world. 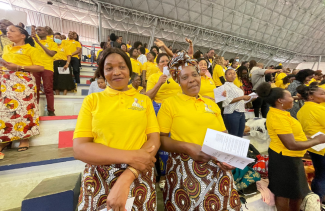 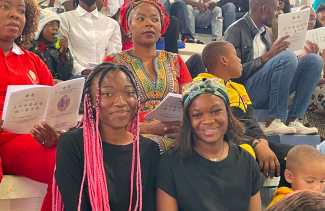 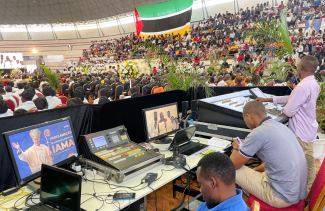 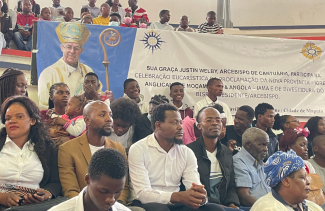