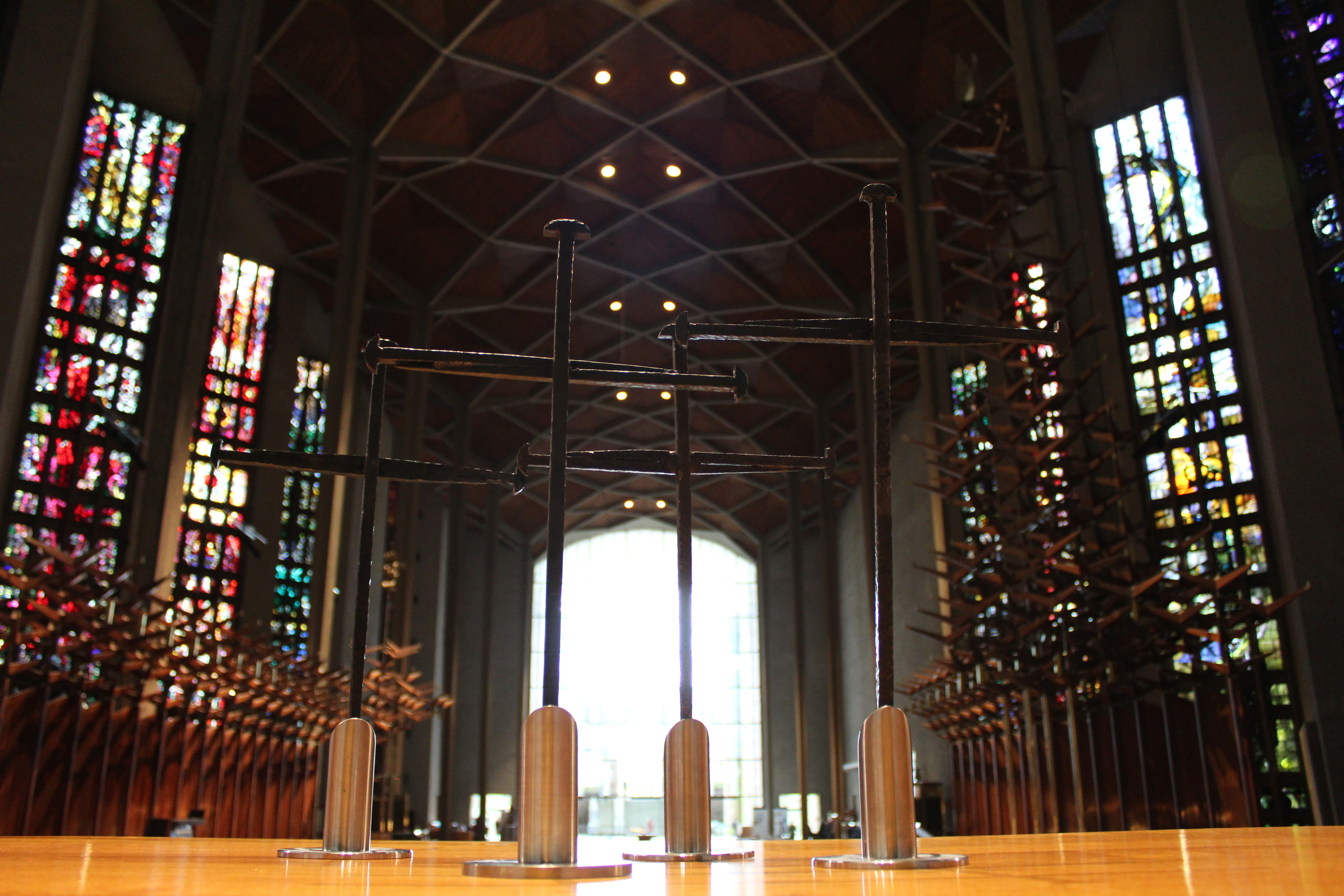 The story of the Cross of Nails

scroll down
The Cross of Nails is a symbol of hope and friendship in the aftermath of conflict. This cross, which Archbishop Justin wears each day, has an extraordinary story behind it.

On the night of 14th November 1940, the English city of Coventry was hit by German bombs. Much of the city was destroyed. The medieval cathedral was left in ruins.

In the days that followed, two powerful symbols emerged from the ruined cathedral. Two burnt roof beams – which had fallen in the shape of a cross in the rubble – were bound together and placed where the altar had been. Three medieval roof nails were formed into a cross, which became the original Cross of Nails.

The words ‘Father Forgive’ were written on the wall of the ruined chancel. Provost Dick Howard made a commitment not to seek revenge, but to strive for forgiveness and reconciliation with those responsible.

During the BBC radio broadcast from the cathedral ruins on Christmas Day 1940, Howard declared that when the war was over we should work with those who had been enemies “to build a kinder, more Christ-like world.”

The Cross of Nails quickly became a potent sign of friendship and hope in the post-war years. This was especially true in relationships with Germany, and the developing links between Coventry and the cities of Kiel, Dresden and Berlin.

In September 1947 a Cross of Nails was presented to St Nikolai Church, Kiel, Germany, a symbol of peace between former enemies. This moral and prophetic vision is the basis of Coventry Cathedral’s ministry of reconciliation.

“While I was Canon for Reconciliation at Coventry Cathedral, I presented these crosses in places like Bujumbura in Burundi... To this day that cross remains within the sound of gunfire. This symbol is not one of ivory tower isolation: it speaks into the very heart of the wars, torture and terror that so fill our world.”

Since then the new cathedral, rebuilt next to the ruins, has become a centre for peace-making and reconciliation around the world. The partnerships that emerged from the war became the international Community of the Cross of Nails, which continues to grow globally to this day.

The following day in Rome, Archbishop Justin gave Pope Francis a Cross of Nails he had blessed in the service at Lambeth Palace the day before. It was a symbol of their partnership in the work of reconciliation.

Find out more about the Community of the Cross of Nails

'It's the desire of my heart'

Watch Archbishop Justin, and other former directors of Coventry Cathedral's reconciliation ministry, reflecting on Jesus's command to love our enemies: